With Onslaught, a new way to play has arrived in Star Wars: The Old Republic! In this 2020 SWTOR Imperial Agent Sniper 6.1 guide specializing in Ranged Shooting, you will learn everything you need to outperform others. 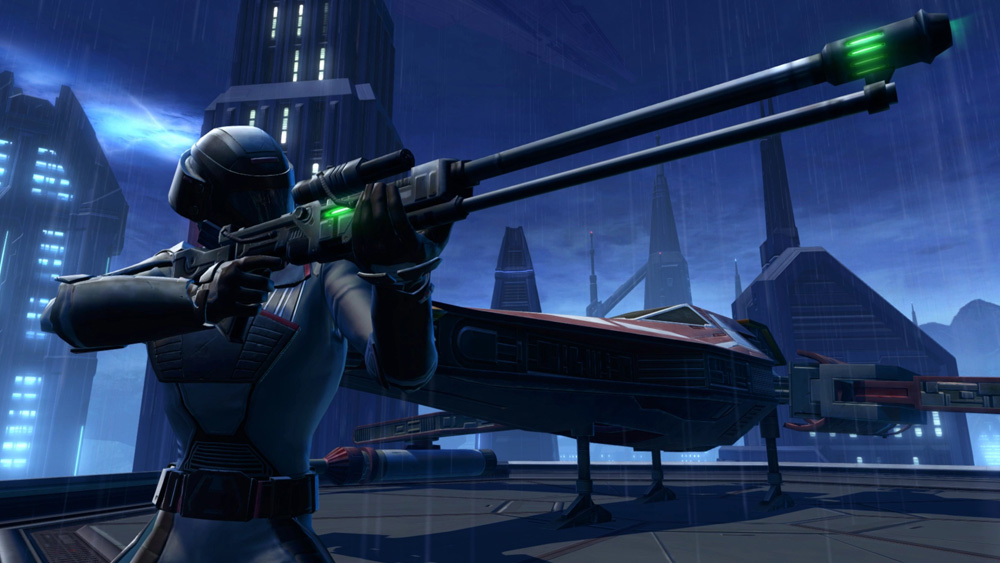 With the Onslaught expansion, new sets have arrived in SWTOR, as well as new gear that changes the style of play. With the introduction of tactical items, it is possible to adapt your gameplay to each fight. In this guide to the Imperial Agent Sniper Ranged Shooting in 6.1, you will learn all there is to know about the class. What panoply to choose, what tactics to play or what talents to adopt: wear the colors of the Empire!

The Ranged Sniper has few truly remarkable talents. We note, however, that Decisive Regulators are particularly effective in many situations for the survival they provide. Likewise, Premeditated Pursuit offers DPS on the move, which specialization can sorely lack.

In the Heroic Tree, Tactical Withdrawal can be very effective in fights where the group's healer is running out of steam. It may therefore be worthwhile to choose it instead of Over-Preparation depending on the situation.

Set and Tactics of the Ranged Shooting Specialization in Onslaught

With unstable Energies the Corrosive Dart gains great utility. Their damage is increased, and using Continuity applies the remaining damage while resetting the bleed.

The Stable Stance set is particularly effective since Taking Cover increases your damage while saving you energy. This set therefore offers a significant bonus in terms of DPS, and all that remains is to opt for an amplified Champion piece to complete it.

Use Ripper (Critical) colored crystals, as the Mastery and Potency contribution is paltry at level 75.

It is important to drive the Accuracy to 110% so that you never miss a shot. Since Operation bosses are of a much higher level than yours, 100% Accuracy is not enough. Alacrity not only allows you to cast spells faster but also reduces your channeling and recharging time. It is therefore important to favor these statistics up to the minimum cap of 7.43%. For the rest, once these two quotas are reached, Crit is the best Marksmanship Marksmanship stat, as it allows you to drastically increase your damage throughout the fight.

How To Play Imperial Agent Sniper With Ranged Shooting?

The Ranged Sniper Agent is a long-range DPS that takes cover before engaging in combat. He takes advantage of this tactic in particular to reduce the damage suffered, but also to use unique abilities. This Imperial Agent is comfortable with poisons, especially the Corrosive Dart he uses. But he doesn't hesitate to execute targets that are already in bad shape with his knockdown.

Launch of the fight

This rotation follows the opener directly, the Corrosive Dart is still active.

With this guide to Imperial Agent Sniper Ranged Shooting, you have now mastered the basics of this DPS gameplay. Its equivalent on the Republic side, the Maverick Precision Shooting, has the same strengths and weaknesses. Only the names of spells and equipment differ. To make your Imperial Agent Sniper unbeatable in the game, buy cheap SWTOR credits on AOEAH.COM to get the best armors and weapons for him!